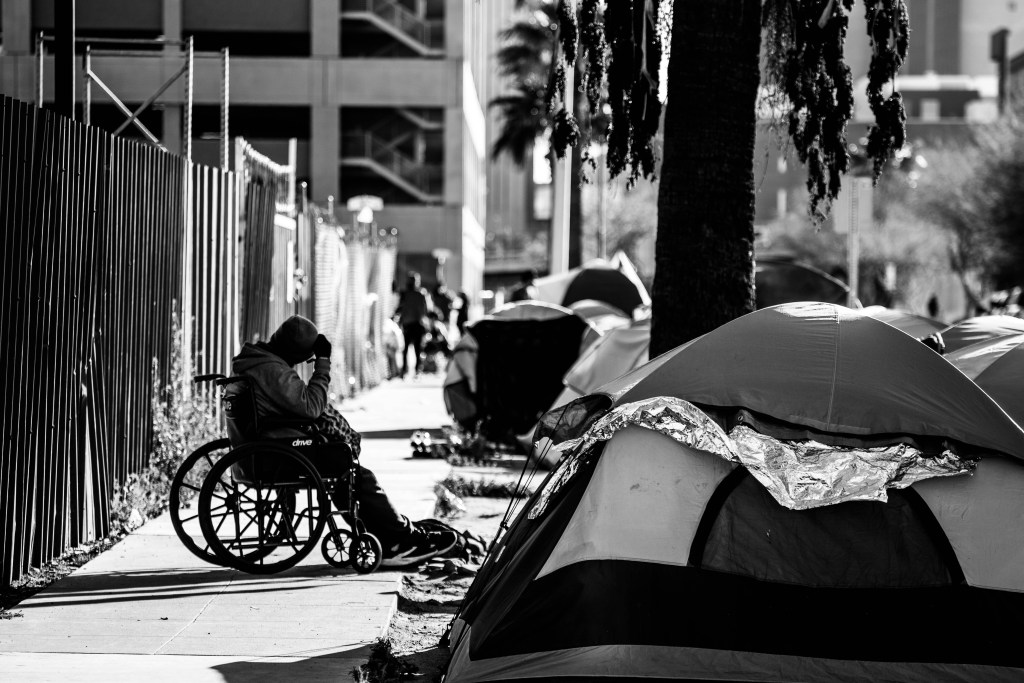 Image by Geesling photography -SMI people on the streets of Phoenix

Linda Mimms initially shared this article via social media. This article is a brilliant take by Dr. Rob Laitman on what it costs our society monetarily and, more importantly, our humanity. Failure to appropriately treat people with mental illness disorders is caused by not meeting people’s treatable medical brain disorders, in addition to multiple other factors. We have been violating the CIVIL RIGHTS of this neglected group of sick citizens who have needed treatment for decades with disastrous results. The family and community burden is one of these many disastrous outcomes. These members’ lives with serious mental illnesses are often 25 years shorter than the rest of the population. Jails and prisons are treating (though inadequately) our sickest society’s members using our criminal system as an alternative to a therapeutic environment.  They have become a de facto significant psychiatric provider in this punitive setting. We continue to treat the behaviors of mental illness as criminal acts.

“The more I look into the horror of our healthcare system, the more outraged I become. Let me give you some perspective as a nephrologist (kidney specialist). End-Stage Renal Disease (ESRD) is the only medical diagnosis that automatically qualifies you for Medicare. Currently, there are 468,000 ESRD patients in the USA. The average expenditure per patient per year is $150,000. The total cost is 70 billion dollars. Employment in ESRD patients is 20% employed to age 55 and less than 3 % thereafter. Now let us look at the psychotic spectrum disorders representing 2% of the population (1 % schizophrenia spectrum and 1 % bipolar with psychosis). This percentage represents 6,620,000 individuals. If we were to support their medical needs fairly and comparably, we would be willing to devote 1 trillion dollars just for their care.

So what do we spend? When it comes to direct patient care for schizophrenia, the most recent estimate from a 2016 study was 37.4 billion. If you were to assume that the cost of taking care of someone with bipolar with psychosis was similar (actually, we know it is substantially less), the cost would be about 75 billion. Essentially we are only spending less than 1/10 for our patients with psychosis medical care than we have already decided would be appropriate in the ESRD population.

What is even more outrageous is this lack of support leads to tremendous non-direct healthcare costs, including law enforcement, homeless shelters, and productivity losses of both the patients and the caregivers. Specifically, for schizophrenia, unemployment cost was 59.2 billion, and caregiving was 52.9 billion.

What drives this tremendous disparity in resource allocation starts with the nihilistic belief that psychotic spectrum disorders are not treatable. Why should we devote resources to a hopeless population? Another component is that 50 % of this population has anosognosia, and therefore does not feel that they need treatment. Given the current status of the laws that “protect” patient’s rights, such as HIPAA and the underutilized and underpowered AOT laws, it is impossible to engage the patient even to start an effective treatment. Where we are right now is less than 50% of all patients with psychosis receive any care. The biggest psychiatric providers are the LA jail, Cook County jail, and Rikers Island jail. It is estimated that 20-40% of the prison population has a psychotic illness. The ever-growing homeless population also has been found to have a similar % of serious mental illness. At present, in those receiving treatment, only 14 % are in meaningful recovery.

The question is, what are we doing wrong, or is this just a hopeless population? What does the evidence say? As it turns out, there is increasing evidence that early identification of prodromal high-risk individuals can be identified, and by working on their processing speed (REM) the development of the full-fledged psychotic disorder can be aborted. Even after the development of psychosis, early treatment with the most effective treatment and wrap-around social services can change the trajectory of the illness. This is being demonstrated impressively with the Recovery After Initial Schizophrenia Episode (RAISE) study.  Remarkably,  the VA has shown that if patients are switched to clozapine, there is a savings of over $ 20,000 accrue per patient-year initially, and as monitoring becomes less, that saving grows. Switching to clozapine has also led to the best survival, the lowest hospitalization rate, and the best quality of life.  In my hands, I have demonstrated what is possible with optimal clozapine care. 75/103 of my patients treated over six months are in meaningful recovery. I define meaningful recovery as being in school, work, or a PROS program training to work. Hospitalization and, therefore, the cost of care has been minimized. In over 330 patient-years of care, there have been only 1.3 years of hospitalization. This translates out on average 1-2 days/year in the hospital. Medical compliance has been over 90% in those that have been successfully engaged, and overall over 98% of the population considers themselves improved with my care.

So we need to let our legislators know that they are not throwing good money after bad money. We need to have the resources to change the barriers to care. Specifically, we need a national uniform rational AOT program that gives the provider the ability to treat the patient where the need is demonstrated. Serious mental illness is a team sport, and communication has to be seamless, so we need to reform HIPAA to assure that caregivers are involved in every step of the way. We need to invest in improving access. Taking care of these patients takes a lot of work, and the reimbursement is dismal for the provider. So I return to the ESRD program. For every dialysis patient, the provider is paid a fixed amount for dialysis management. Clozapine is a lot of work and is superior to all other antipsychotics in every setting, and yet only 2% of the population is so treated. We need to invest in these patients and provide a treatment stipend for management. A reasonable fee schedule would be initially $1000/mo for the first six months, $750/mo for the next six months, and then $500/mo after one year. If the patient is hospitalized, the amount should be reduced proportionally to the time spent in the hospital. This is how the ESRD program works, and this carrot has led to superior clinical care. In our population, this small carrot could be a game-changer not only in the quality of care but the end of being a tremendous cost saver. With the cost-saving, we would then be able to devote more resources to all of the appropriate supports.

In summary, we need to convince the powers that be to devote appropriate resources. We need bravery to insist on rational laws that help engage our patients and families in therapeutic relationships. Our medical professionals need to be re-educated in what is possible and learn the correct approach to treatment. We need to pay adequately for this arduous but rewarding work. If we do this, we will be able to provide an optimal clozapine based regimen with full wrap-around psycho-social services. With this, we will not only end suffering, but we will see a majority of this population lead lives of purpose and meaning.” Robert S. Laitman, MD

Please tell us what other topics of interest. Begin Survey